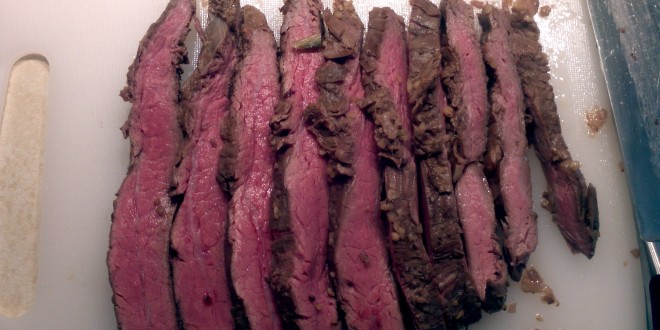 Update: Consumer Sous Vide machines have really dropped in price since I made my sous video machine.  I now recommend an Anova Sous Vide instead of making one.

You probably thought I was going to throw some hot rocks into a pool of water, didn’t you 🙂  Well if you haven’t heard of Sous Vide before, its pretty much the ultimate keto cooking tool. The basic idea is that you vacuum seal food into a bag and place it into a hot water bath for a period of time.  The temperature of the water bath is maintained at a steady temperature which is the desired finishing temperature for the meat.  This is how restaurants get perfectly pink steak from side to side without burning it.  They simply set the Sous Vide to 140 degrees F and bam, medium steak.  The only problem is that even the lowest end consumer Sous Vide machines go for a lot of dough.  So, what’s a man to do, build my own of course! I started my journey by reading the Make: Sous Vide Immersion Cooker but I ended up varying quite a bit on the components and design.  I went through two earlier revisions but I think this latest one is good enough to share with the world. 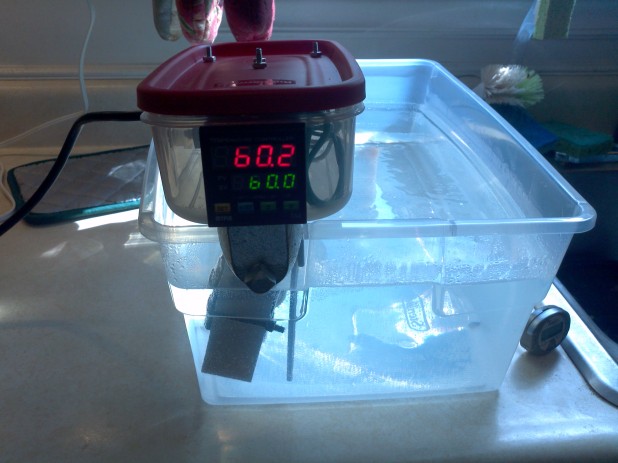 As you can see, the unit is contained in a standard Rubbermaid container and clamps to a storage container where the water goes. You set the temperature on the controller and off you go! 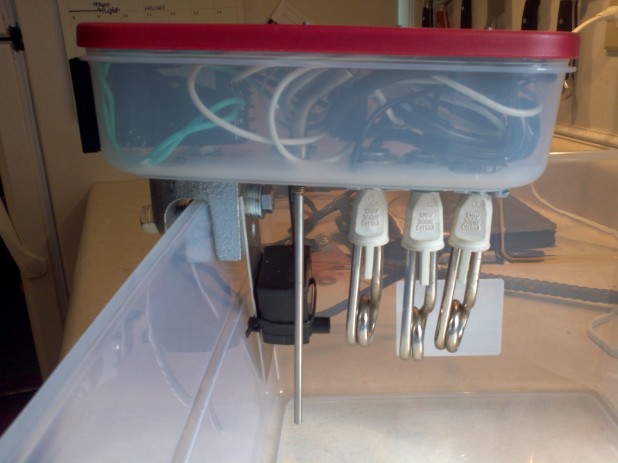 Here is a side view of the unit with no water. From left to right, you have the mounting bracket, the pump, then the temperature probe, followed by three heating elements.  Now that you’ve seen the goods, lets get on to how to build your own!

Disclaimer: This project involves electricity, power tools and water.  If you don’t feel comfortable combining all three of these, I would just buy a commercial machine. I am in no way responsible if you hurt yourself and you should undertake this project at your own risk!

So my main goal in making this Sous Vide machine was for it to be as easy as possible for the average hobbyist to make.  I did the whole design with no custom parts and everything can be bought from Amazon and shipped directly to your house.  In reality, my version included some items I already had and some of them I bought from either Home Depot or Radioshack. Things like the electrical clamps and small hardware are probably cheaper at a hardware store and you should go there for those items. Let’s get started! 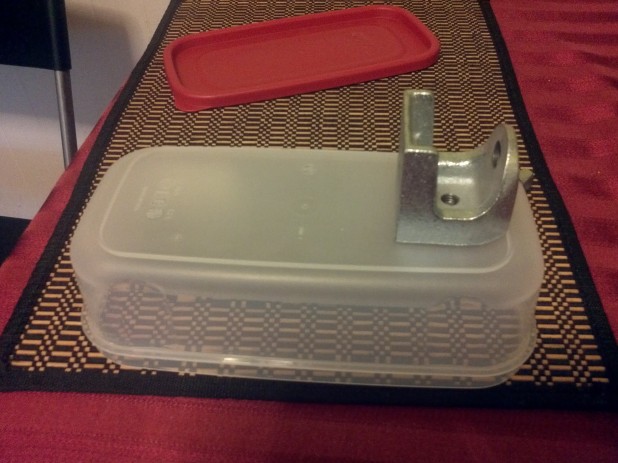 The first step is to attach the electrical beam clamp to the bottom of the container. It took me a while to find a suitable way to mount the container to the water vessel but when I saw this in the hardware store I was ecstatic!  It can hold 750 lbs and comes with all the proper mounting orientations we need built in.  Place the mount as shown with the edge up against the lip and centered.  Then mark the center of the whole and drill it out with a #16 or close drill. You can either secure the mount on now with a 3/8″ hex bolt and washer or wait.  I should also note that if you can’t find hex bolts short enough to not hit the container, buy a longer one and cut it with the dremel. 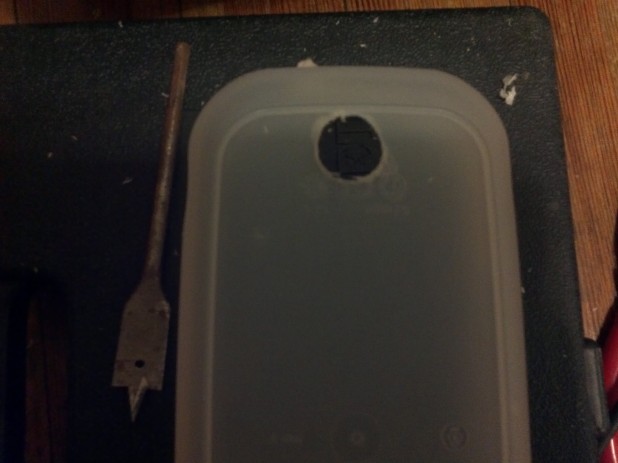 Next cut the three holes for the heaters.  Make sure to space them out enough so that the nut can secure on the other end.  Roughly put them in the center line of the container.  In an ideal scenario, all of the heaters are aligned and the pump pushes the water through their aligned holes.  Use the paddle bit to make the whole but you might need to expand it a little with a dremel to make it fit. 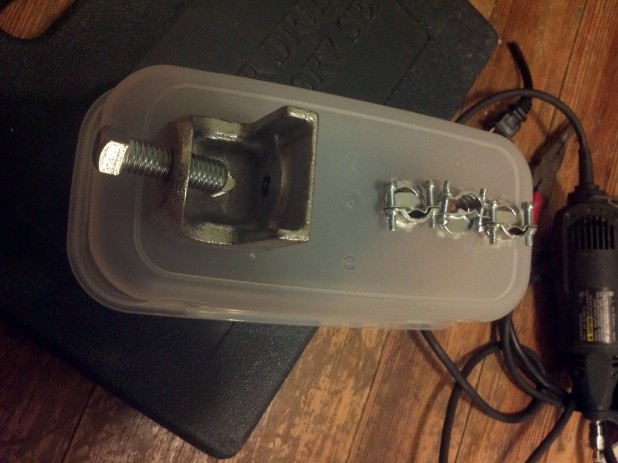 Here is a picture with the three clamps installed.  It really was a moment of genius when I found these clamps.  There really is no good way to hold these stupid heaters because they are just plastic with no retention mechanism.  However, they do have a little lip on them and it perfectly fits into the cable clamp.  Originally I was just going to grab the wire coming off the heater but they held even better on the lip. 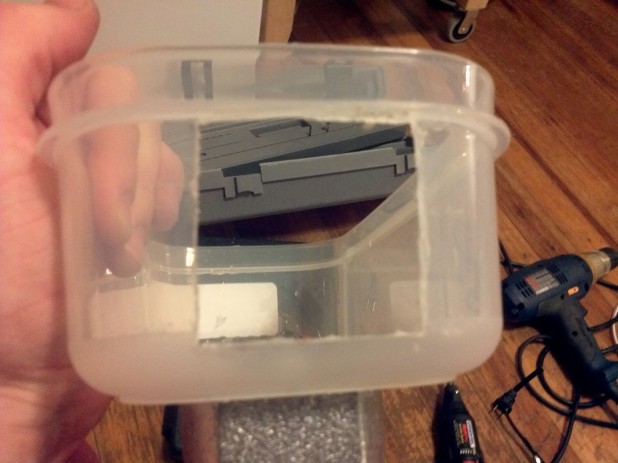 Cut out a hole for the controller.  With this container the PID controller fits perfectly under the lip.  Trace it and then very carefully cut it out with the dremel. 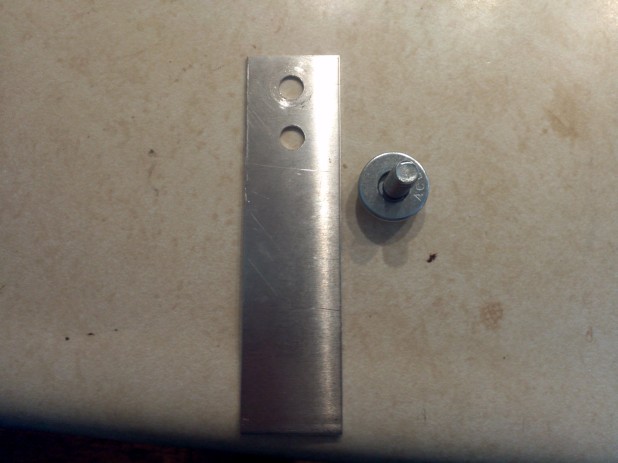 The aluminum rectangular bar is for the pump.  Technically the pump has suction cups on the back of it but they are pretty miserable.  Also, this keeps the pump in the exact position you want. Measure twice and cut once, hence the two drill holes …  You’ll end up zip tieing the pump to this bar after it gets bolted to the same clamp that holds the container. 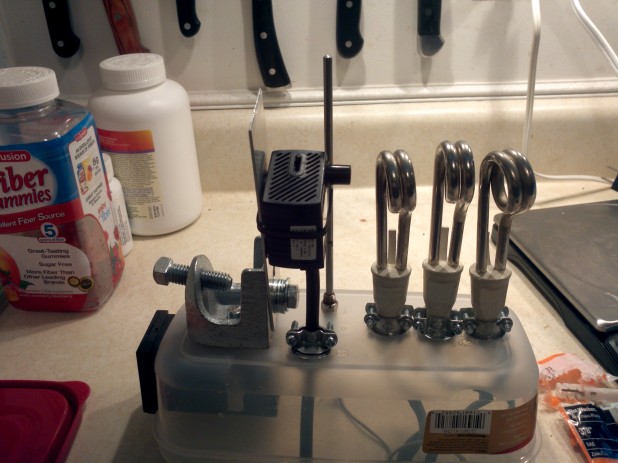 Here is the finished bottom.  Quite nice looking if I do say so myself 🙂  You can see that I ran another electrical clamp for the pump wire and I also installed the thermocouple. 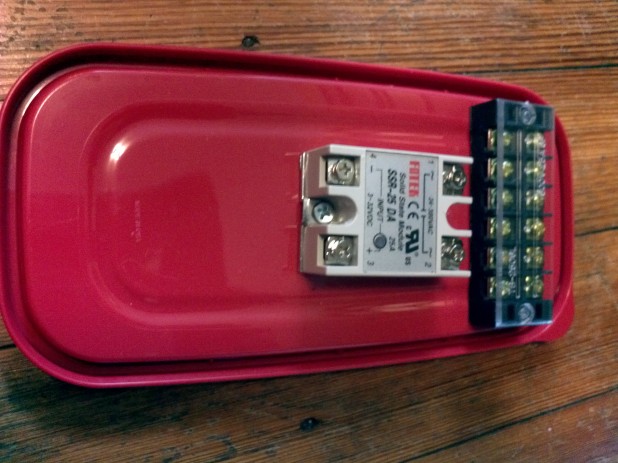 I put all of the electronics on the lid of the container. On the left is the SSR or solid state relay.  Because the elements of the system can draw a lot of power, the PID controller actually only sends out a low voltage signal that then switches this SSR.  This SSR is then capable of switching a much larger load.  Basically the PID connects to this and it acts as a large switch for the heaters.  The item on the right is a terminal strip and just makes wiring easier.  To connect these, just use #8 screws with nuts and washers.  I just marked them and drilled holes through the top. 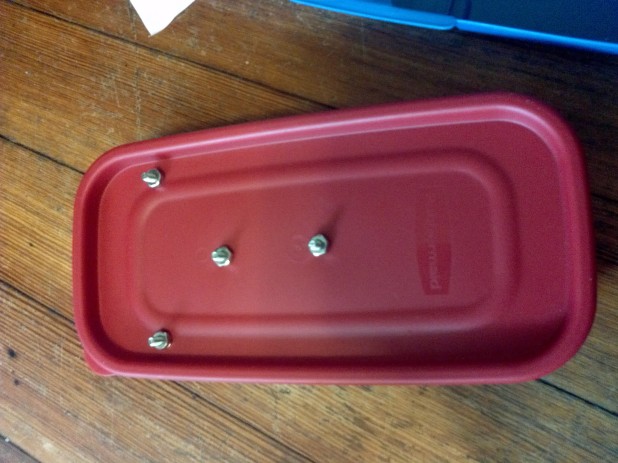 Here is the top. 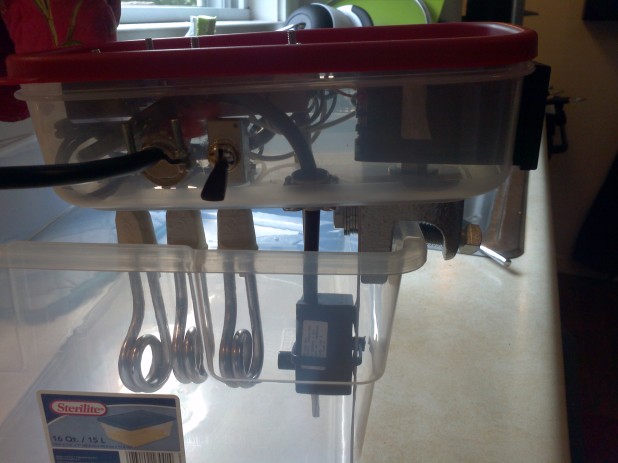 Here you can see the last container mod which is the power cable and the power switch.  I originally bought a really cool switch from Amazon but it was rectangular and would have been near impossible to install.  Instead I drove to Radioshack and picked up a simpler switch that can be installed with one drill hole. I also secured the power cord with the last of the five electrical clamps. 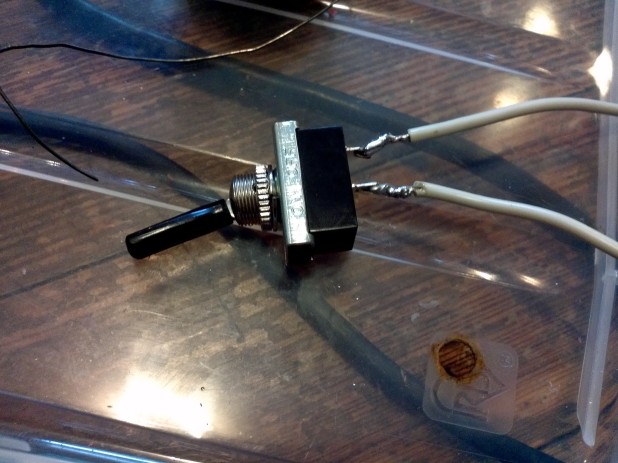 Most of the wiring is via screw terminal but the switch needs to be wired another way.  You can do it however you want, twisting, duct tape, crimp connectors, whatever.  However the correct way is to feed the wire through, then twist it, then solder it as shown.  I specified leaded solder because simple, cheap soldering irons have problems with lead-free solder and this small amount of solder isn’t going to hurt anything. 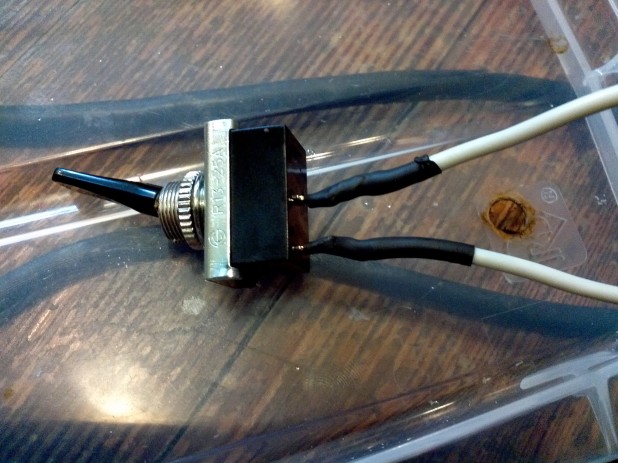 Again, you can do it anyway you want, but ideally it should be covered in heat shrink. 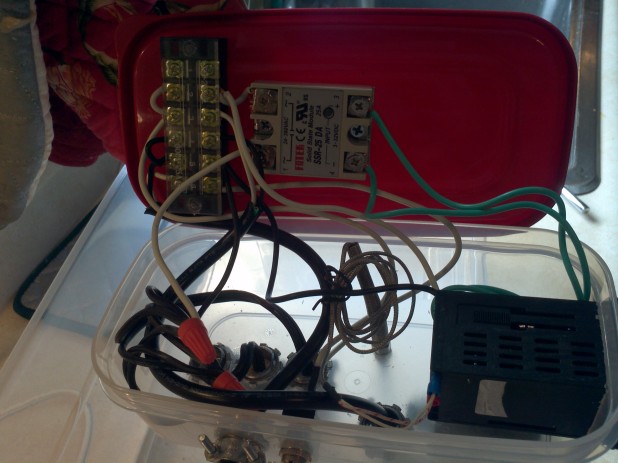 Here is the final wiring.  I should note that rather than buy wire, I just took an old extension cord I had and ripped it apart.  You then have 25 feet of wire designed for this purpose without having to buy anything expensive!  Also, make sure to read the manual regarding your particular controller to make sure you wire it up properly.  The theory with the wiring was that I put the hot side (black) on a switch and ran neutral to wherever it was needed.  So when you hit the switch, it turns on the pump and the controller and makes half of the SSR live.  Then the PID controller controls the SSR and can connect the hot to the neutral to complete the circuit for the heaters.  The thermocouple then connects directly to the PID controller.  NOTE: Make sure it is in water when you hit the power because these pumps and the heater will burnout if not submersed underwater. 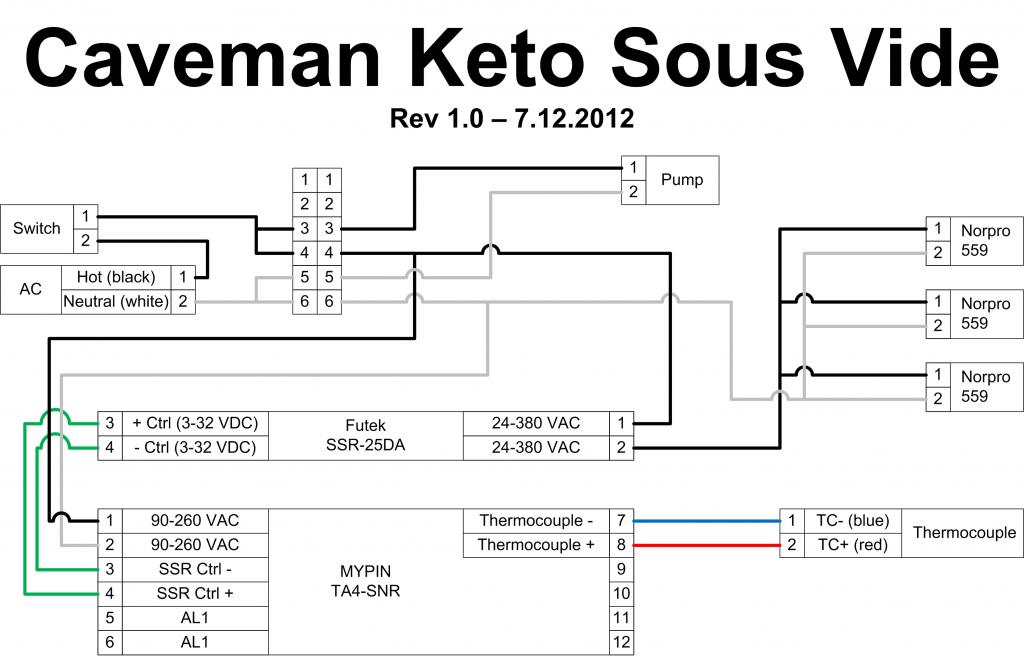 Well folks that’s it!  I will likely be cooking a lot with this in the near future so check out my Sous Vide Recipe section and as time goes on I’ll post all of my vacuum cooking adventures!

Oh, and just for fun, here are some pictures of the earlier revs I went through before I settled on this one! 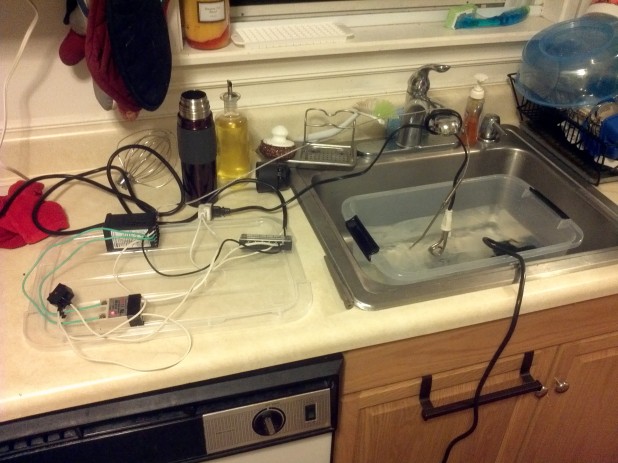 This was the very first test, I literally just wired it and used it in the sink. 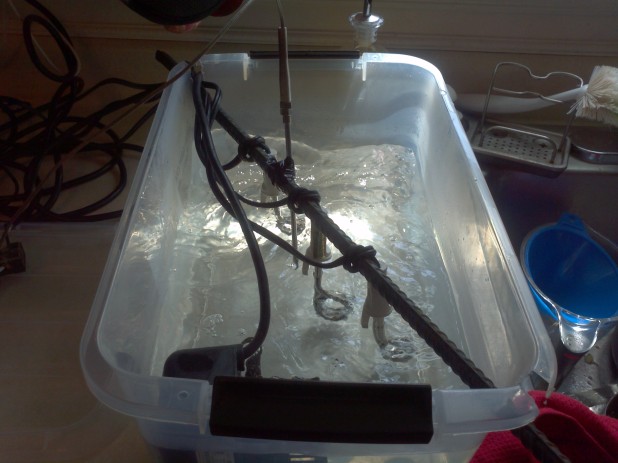 Rev 1.2 used a huge old pond pump I had and some rebar to hold the heaters. I left the house while cooking some eggs and they all exploded because of the power of the pump! 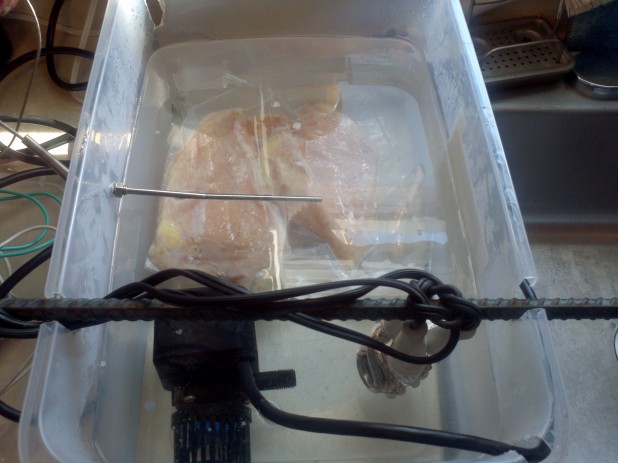 For rev 1.5 I did a tighter integration with more cooking space.  I also put a filter on the pump to reduce its speed. 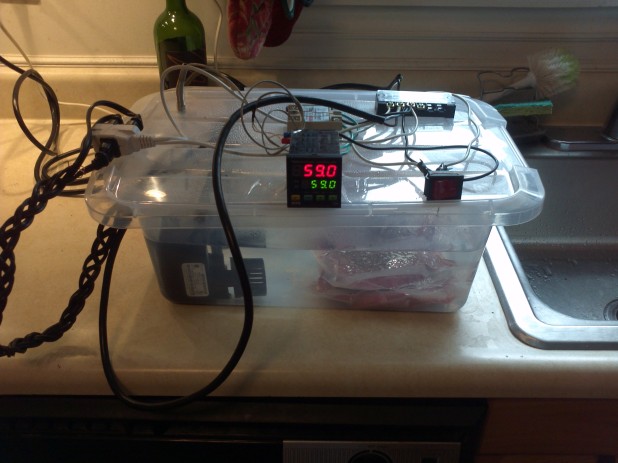 For rev 2.0, I attached all of the components to the lid. This was also the first time I attached the pump to the same switch.  Prior I had to plug in the pump separately.  This version worked well, and I used it a lot, but it isn’t portable and its completely built into this one container.  It also was very hard to keep a consistent temperature with the lid on like this, the temperature would rise too much.  Not to mention all the electronics were exposed.

Well, thanks for reading this far!  Here is some 24 hour cooked flank steak for your effort: 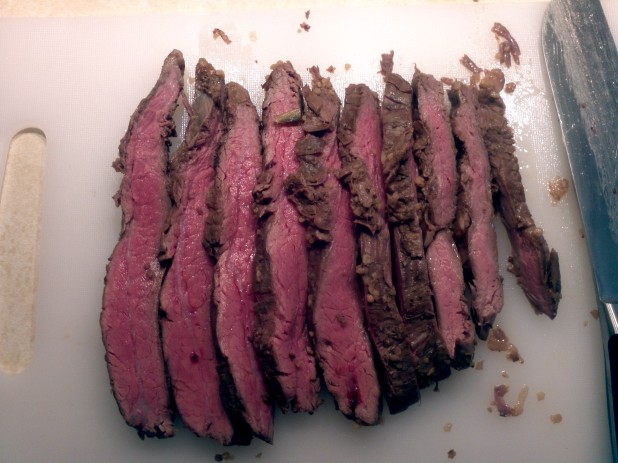