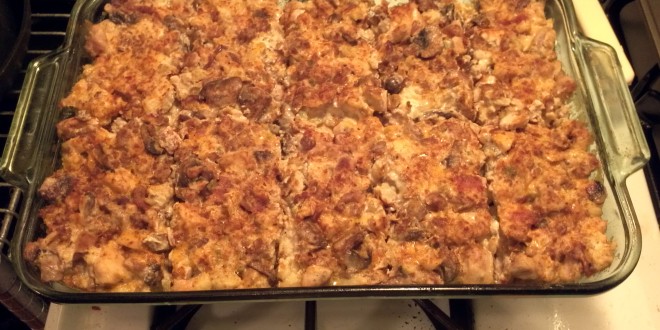 If you’ve followed the blog for a while, you know that I precook most of my meals for the week using what I call 5-day recipes. These are recipes that yield a significant volume of food and can last for the entire week.  The idea is that you only chose to follow the diet once a week, when you plan your meals and cook your food.  It is also more economical to cook in bulk than to make many individual meals.  These meals generally turn out to be some sort of casserole so that is simple to prepare.  The Kitchen Sink Keto Casserole is my latest addition to our weekly lunch rotations and I’ve got to say, this is by far my favorite!  It combines all of my favorite things, pork, chicken, cheese and veggies! 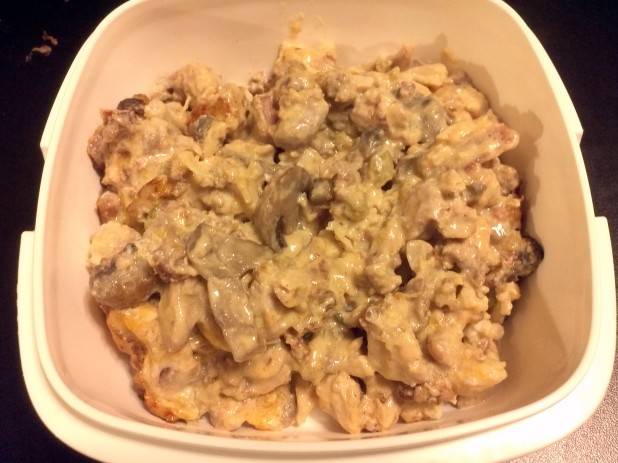 Here’s the finished casserole!  You can almost smell its yumminess through the computer screen!! 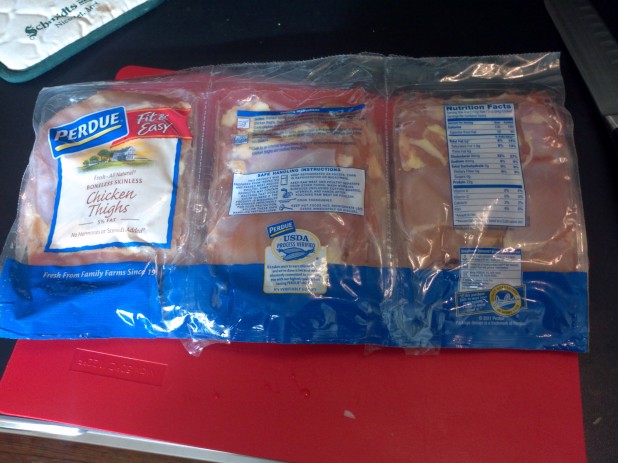 This recipe starts with the chicken. I used chicken thighs because they are super cheap and also have a good fat to protein ratio.  Also, they come in these super convenient packages at BJs. 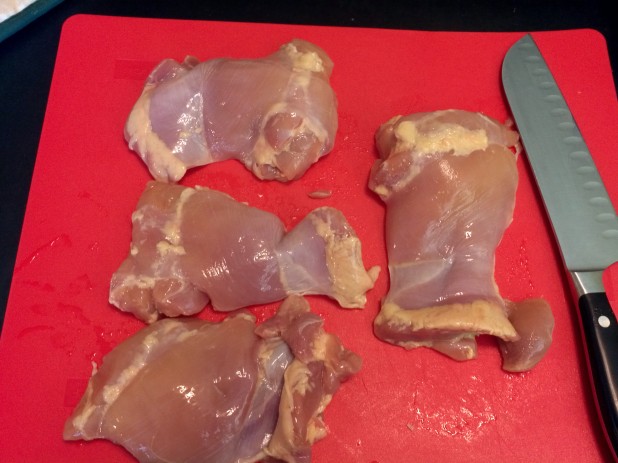 The thighs should look like this. All we’re going to do is chop them up into cubes. 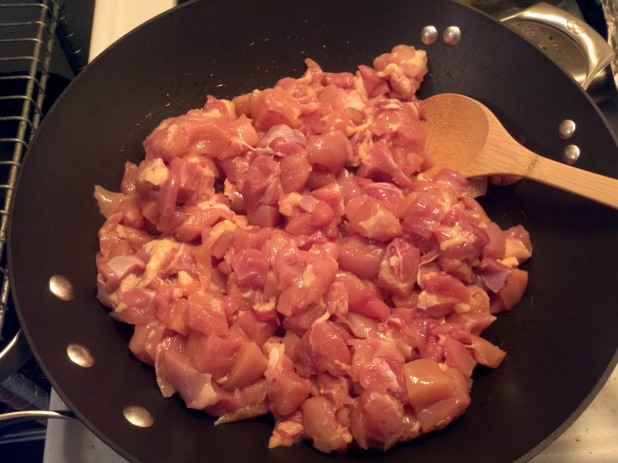 After they are chopped up, throw them in a large pan like my wok and cook away! This is a massive amount of meat so you really do need a large pan. You could also cook them in batches or cook the meat in the oven as done on the chicken thighs and spinach recipe. 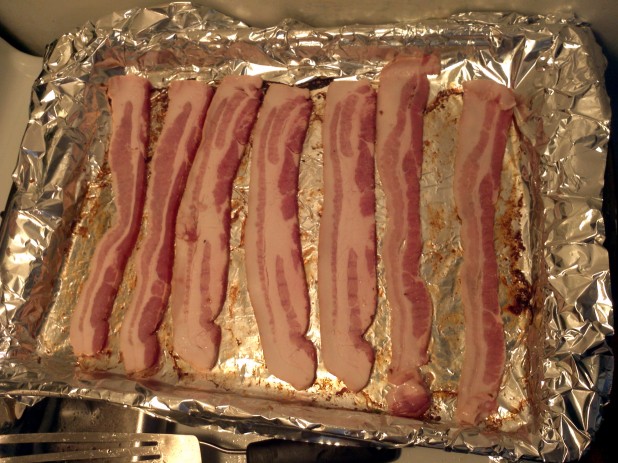 While the chicken is cooking, throw some bacon in the oven. 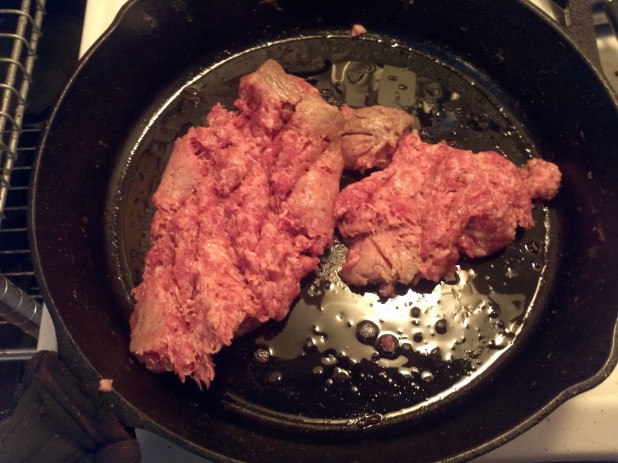 The key to this recipe is multitasking.  If you do all of the work in parallel it can go quite quickly.  At this point we have the bacon in the oven, the chicken is cooking, and now we’re going to cook the sausage. 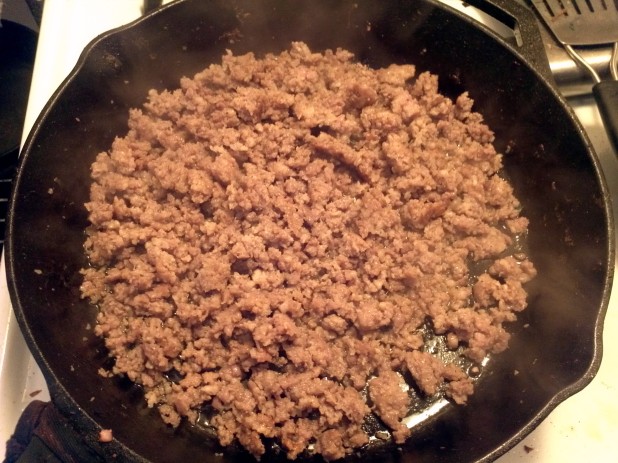 After a bit the sausage should look like this!  Make sure to break it up as you are going and to cook it until no longer red. 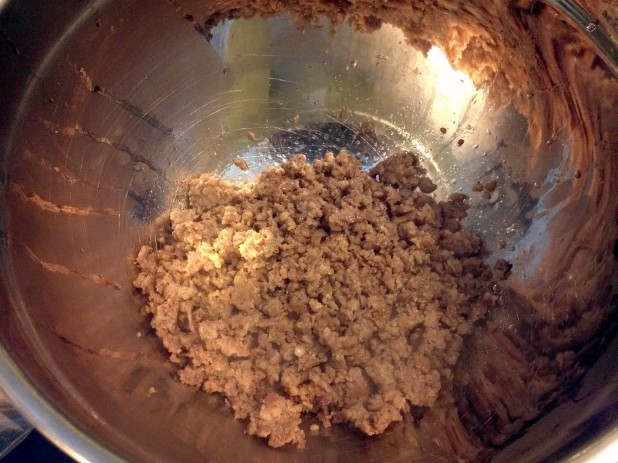 Now if you’ve read any of my other casserole recipes, you know that I’m a big fan of the “big bowl”. It makes it much easier to cook these large meals if you get catering or professional size equipment. You can mix all of the ingredients with easy and not struggle to fit everything. So, that’s a long way of saying, throw the sausage in the bowl!  Make sure to squeeze the grease out of the sausage before transfer.  Also, we’re going to saute the vegetable in the same grease! 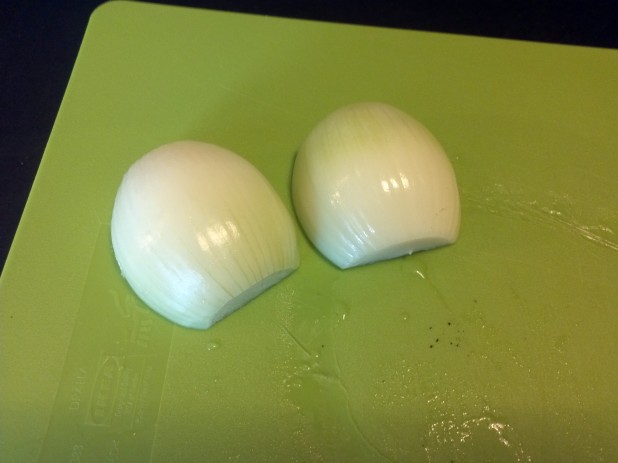 Start with a small onion and chop it up. 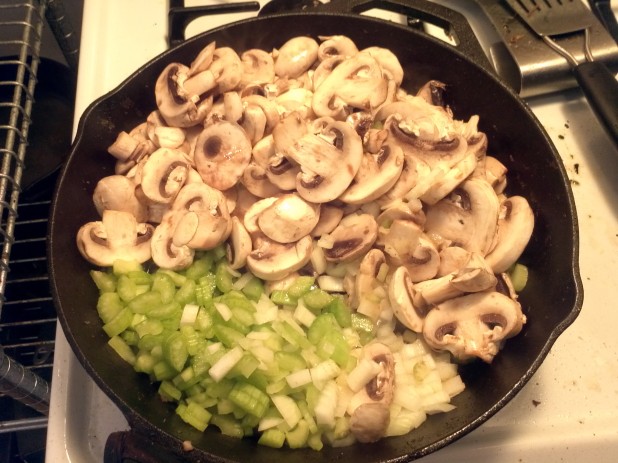 I didn’t show it, but chop up some celery and wash some mushrooms and throw them all in your skillet.  Cook them until translucent. 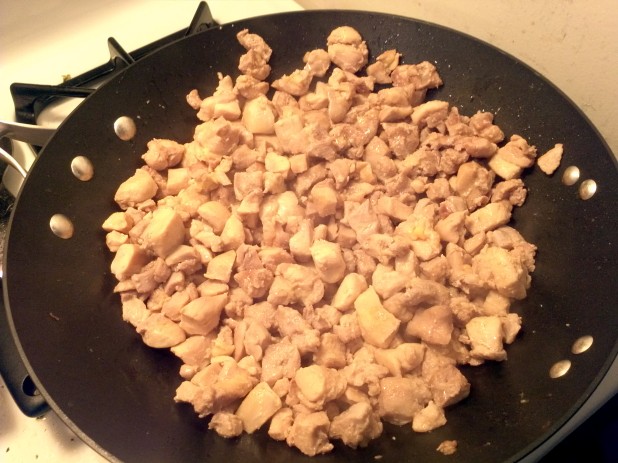 At this point the chicken should be done.  Drain the excess liquid out and throw it in the big bowl.  If you have this pan, I just take the lid and offset it a little to drain the liquid. 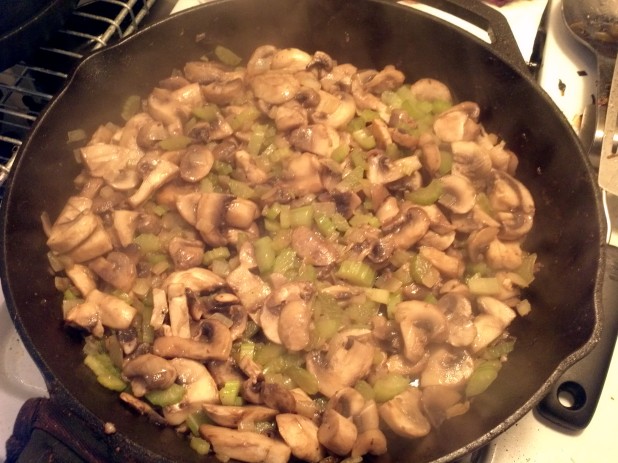 Once the vegetables look like this, you should be done!  Go ahead and throw it in the bowl. 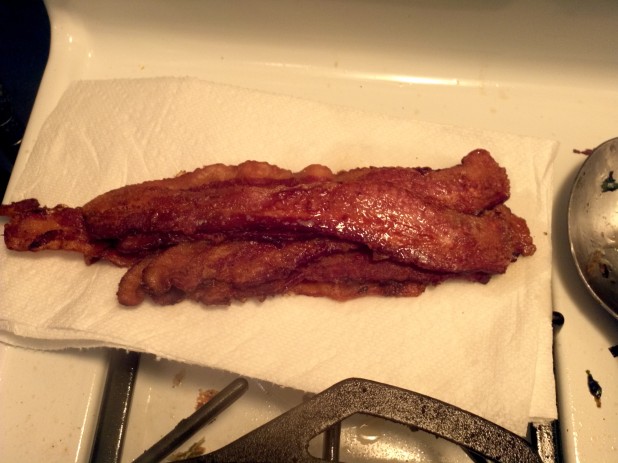 The bacon should also be done. 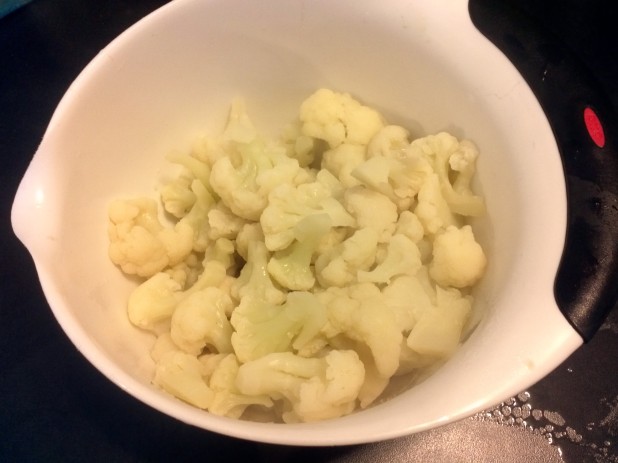 The last vegetable is the cauliflower.  I just microwaved a 16 ounce bag. 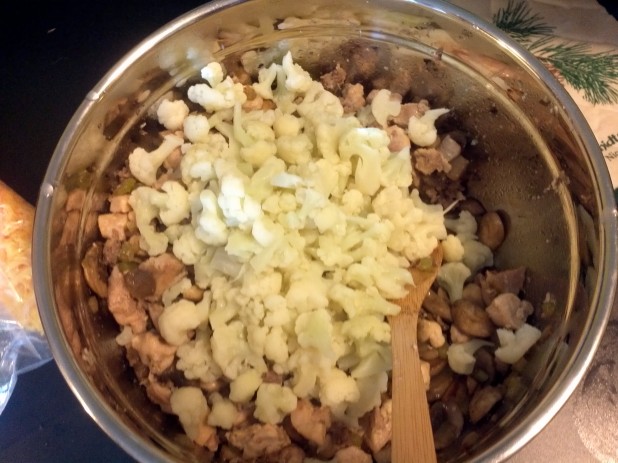 Phew!  Now we’re done with the prep for the bowl ingredients.  Mix them together before we add the cheese and cream cheese. 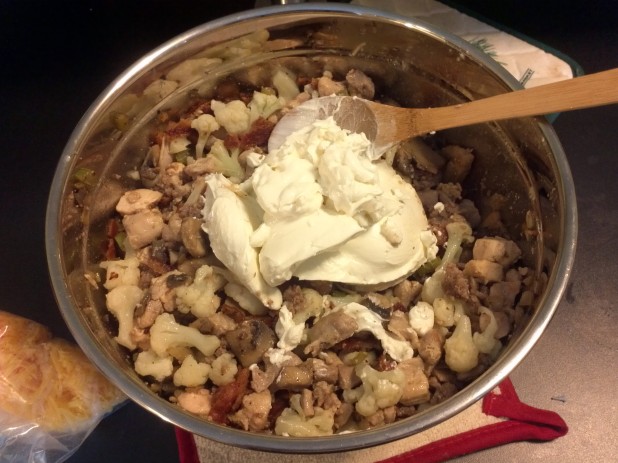 Now add the softened cream cheese and mix.  Make sure to get a hearty spoon! 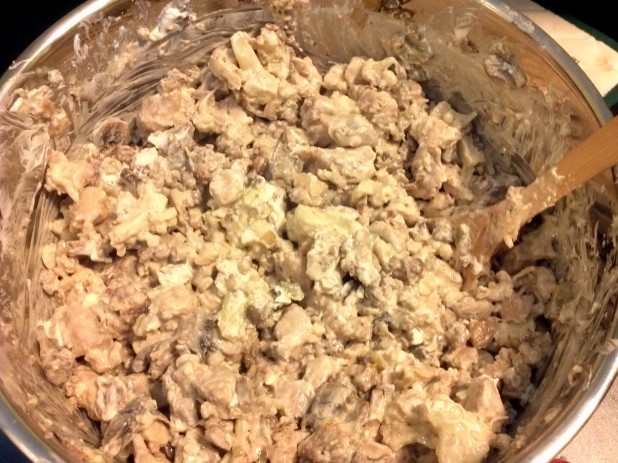 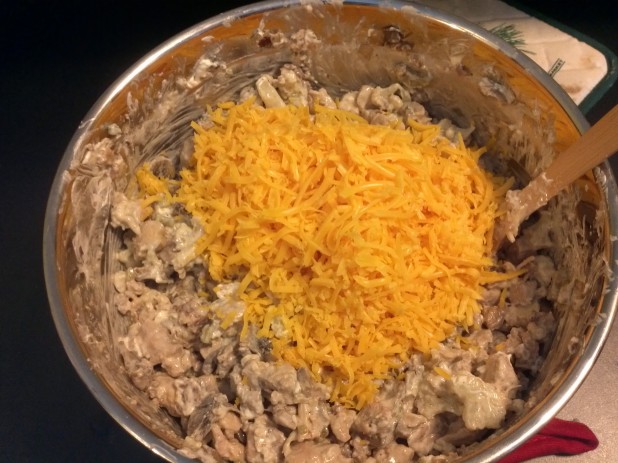 Now add the cheese and mix. 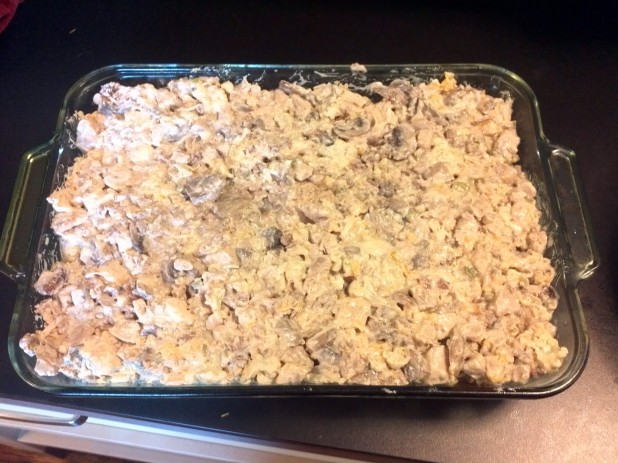 Finally, throw it in a gigantic casserole dish. At this point you can optionally sprinkle some paprika on the top. 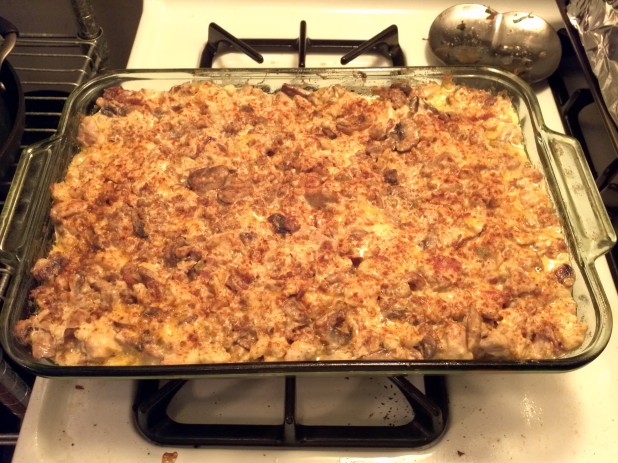 Cook it for 30 minutes at 400 with foil and then 10 minutes uncovered.  It should be bubbly and cheesy at the end and look like this! 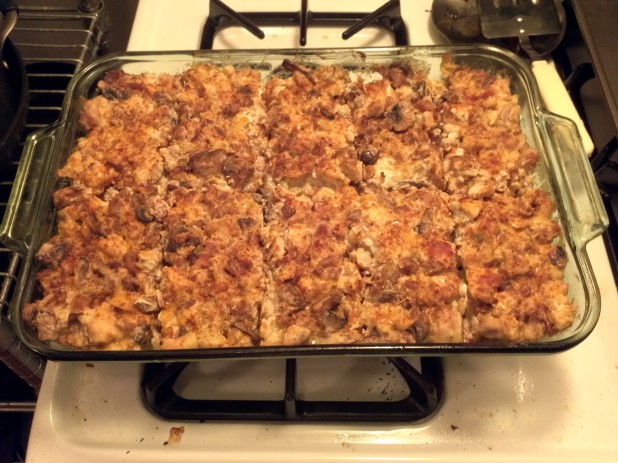 And we’re all finished!  Here is the portioned Kitchen Sink Keto Casserole! 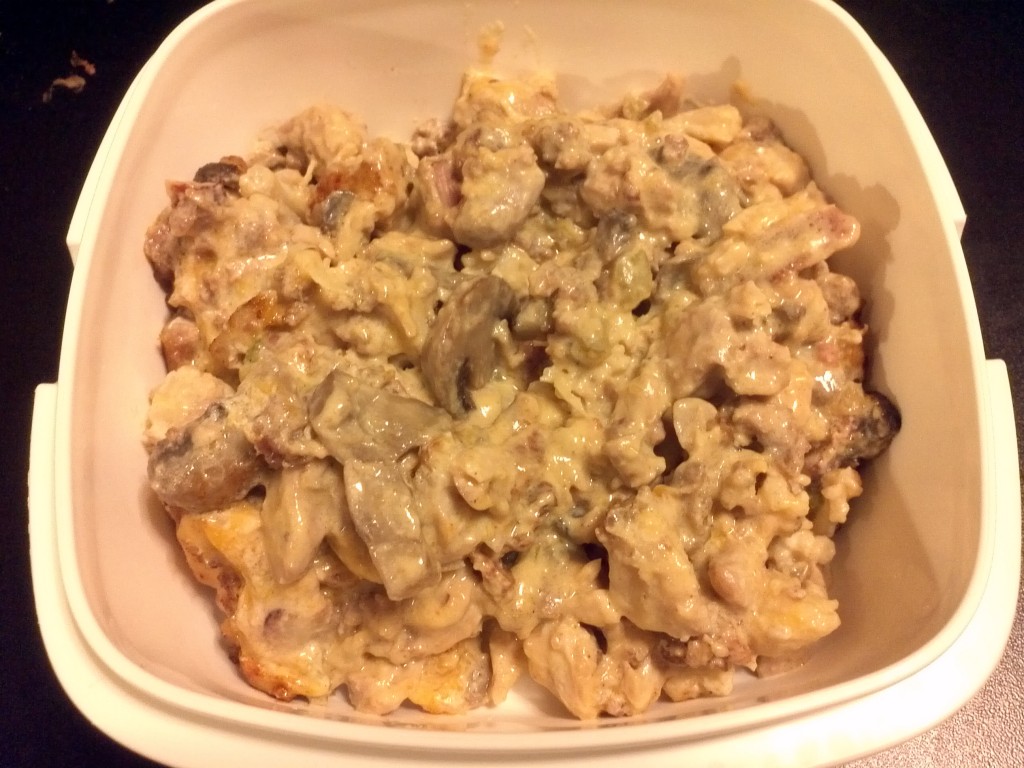 Ingredients
Instructions
Notes
I divided this into 10 when I made this, but it was a ton of food, so I've changed it to 12 servings. For maximum efficiency, cook multiple things in parallel, AKA the bacon should be in the oven as the cauliflower is in the microwave as you are cooking the chicken and the sausage / vegetables. It might take a while the first time you make it but it will speed up a lot if you do these things in parallel.
3.2.1682