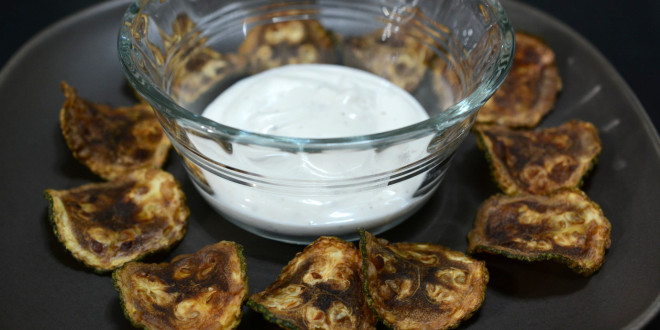 Well folks, its that time of the week again, Fry-day! So break out your deep fryer, warm up some lard, and let’s get frying! Today I’m going to try and replicate one of the SAD diet favorites, chips!  I’m going to show you several ways to slice and dice Zucchinis to try and make fried chips. 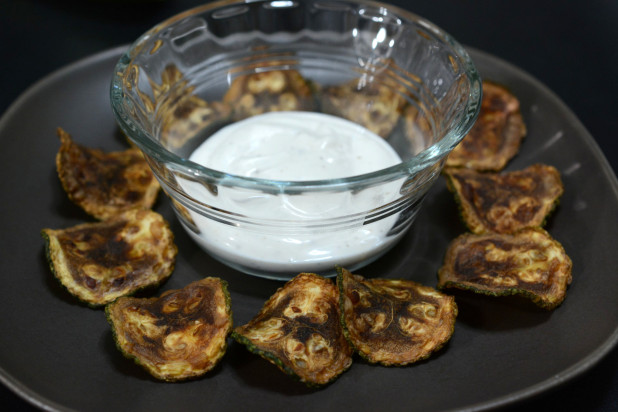 Here was the result! The thin sliced Zucchini rounds worked best and they really crisped up.  I’ve baked and pan fried these before but nothing works quite like deep frying them! I served them with ranch dressing as a dipping sauce but you could dip them into anything you desired. 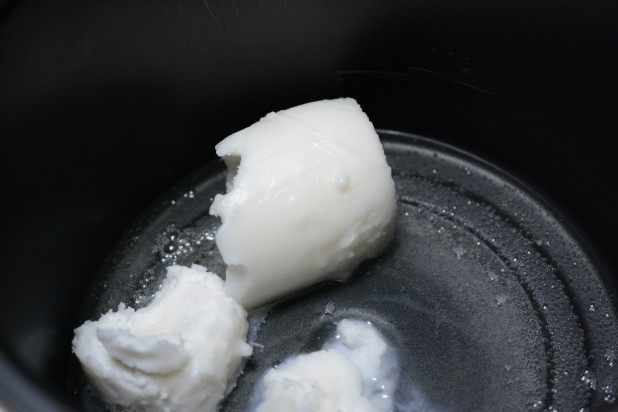 Start by getting the oil in the deep fryer.  In past articles, people have asked me what I use for deep frying.  Well I use rendered leaf lard of course! Above I’ve scooped the leaf lard out of my mason jars of fat (kind of nasty sounding) and they’re melting away.  Note: Your deep fryer needs to be capable of using lard.  Not all of them are, only ones with non submersible elements like this one. I also recommend peanut oil as a really good frying oil and that’s what I use with my turkeys. 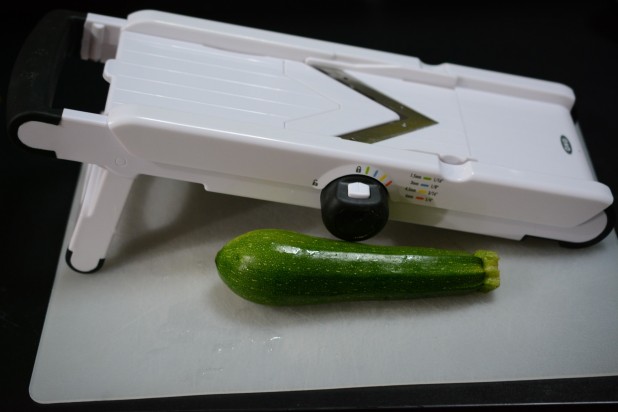 Next, dust off your mandoline and get ready to slice! You can just use a knife but its hard to get consistent, really thin slices without using a tool such as the mandoline.  It also adds the convinence of being able to adjust the thickness and has several blades for ruffle cuts, julienning, etc. 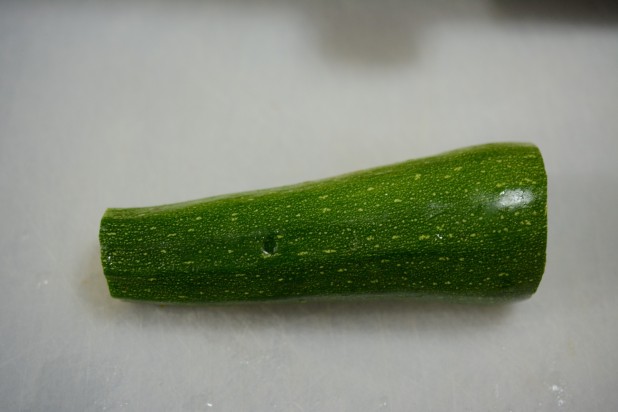 Start by washing the Zucchini and slicing the ends off. 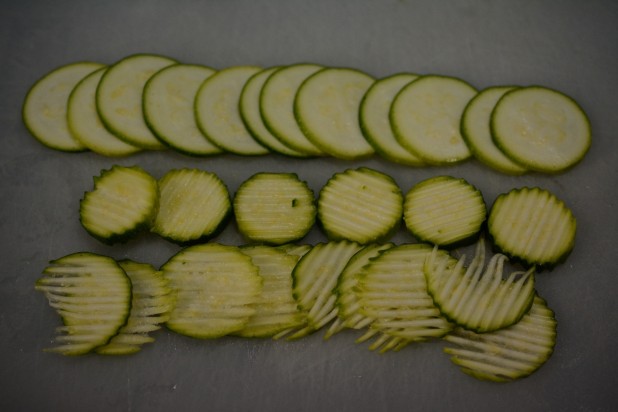 Then carefully run it over the blade on the mandoline. I wanted to try several different kinds of chips.  The top row is just the thinnest slice it would do.  Then I changed the blade to the ruffled one for the second row on its recommended setting.  The bottom row is the same ruffle cut but with a thinner setting.  It turns out there is a reason they have a recommended setting 🙂 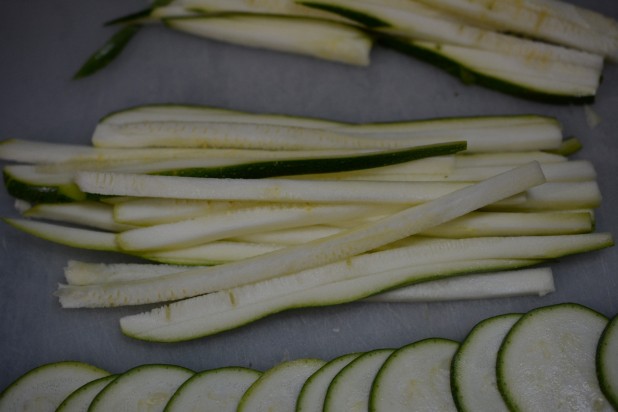 Finally I used the julienne blade to cut up some fries. 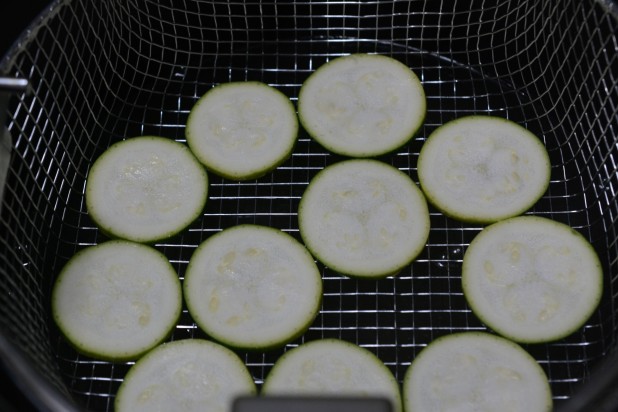 I started with the thin slices, here they are getting ready for the fryer! 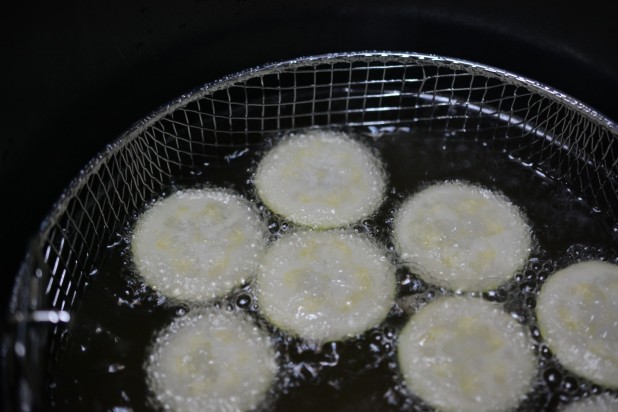 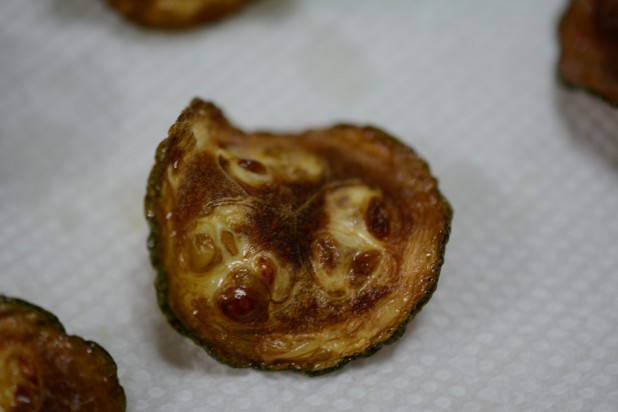 Here’s the result.  They turned out really well!  They crisped up and were pretty stiff.  They did turn more brown once removed from the oil than I thought they were going to.  They did curl but that’s not necessarily a negative. 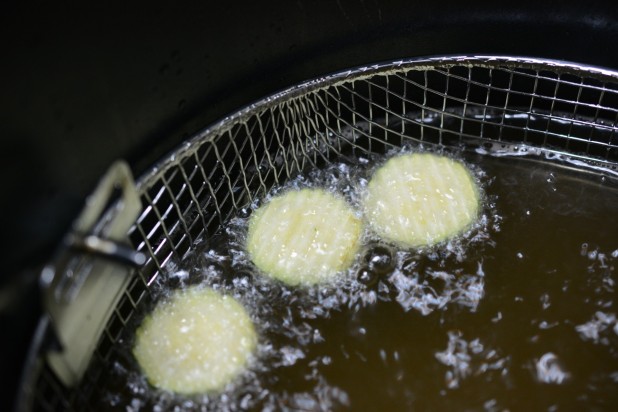 Next I fried the ruffle Zucchini chips. 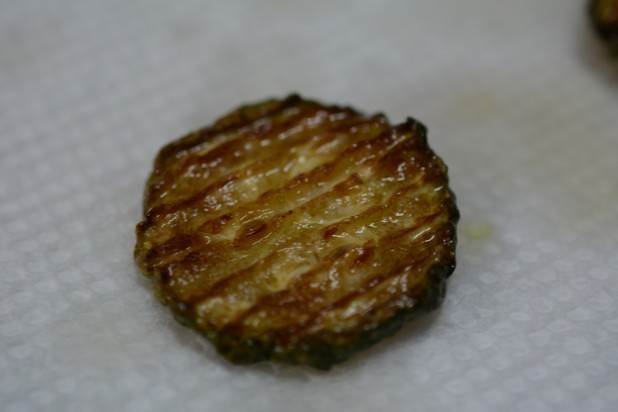 Interestingly, they kept there shape a lot better.  I think the structure of the ruffles helped.  However, they didn’t get as stiff as the chips did.  I’ll have to see if there is an in between setting where I can get them a little thinner.

This was one of the thin ones, they turned out stiff but a lot of them were smaller than they should be as a result of being on the wrong ruffle setting. 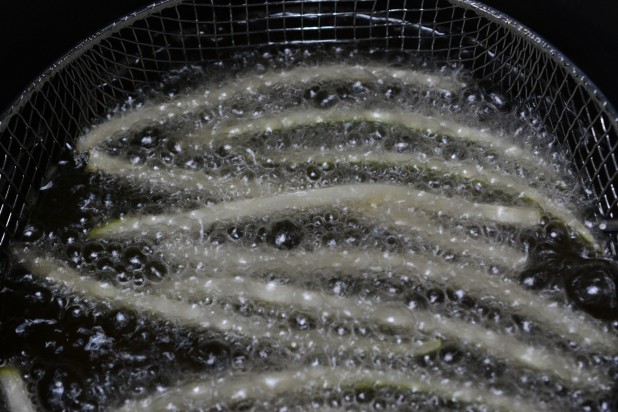 Finally, I fried the fries. 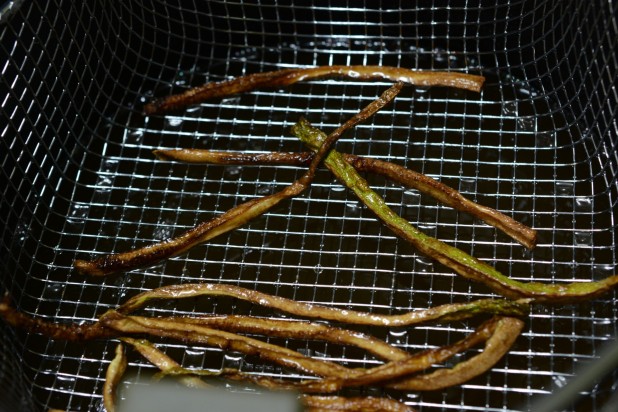 This was the first batch.  They were a little softer than I would have hoped.  I was really rooting for these and I thought they would be the winner.  They were good but it wasn’t anything like a real fry. 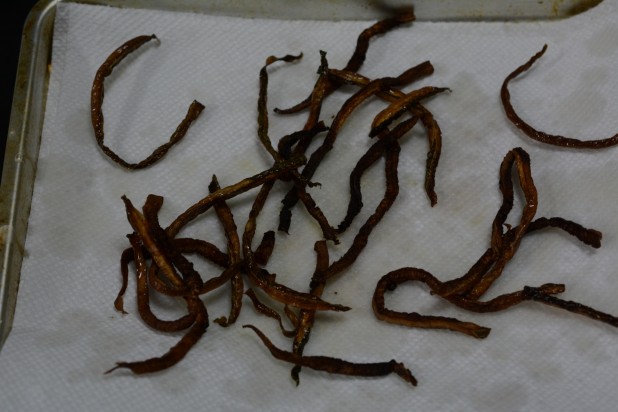 For the second batch, I fried them a little longer.  It did help and these stood up better but did look a little more burnt in appearance. 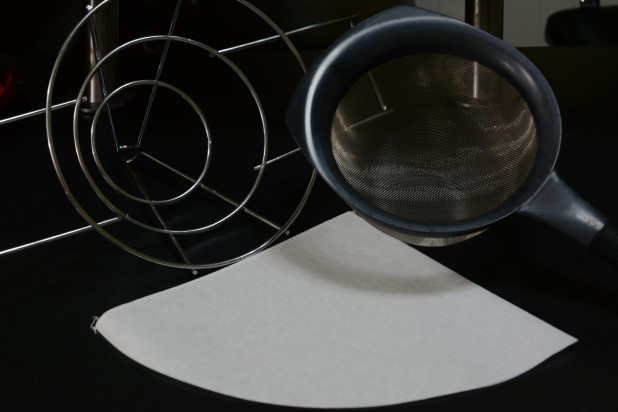 Next, I want to detail my cleanup process.  One of the features that they really push with this particular deep fryer is its “ease of cleanup”.  I think the features of the fryer definitely help but I’ve adapted a different method than they did to help speed the process.  I use the above devices, mainly, a filter holder, a filter and a mesh strainer.  The fryer comes with a filter that fits into the fryer basket.  I used this at first, but it involves you draining the oil into a container, then cleaning the fryer, then pouring the oil back into the fryer, then draining it, then cleaning the fryer again.  This gets rid of all that and does it in one step. 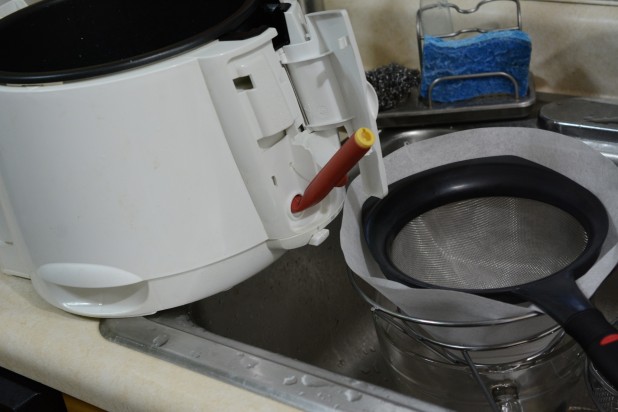 Here’s a picture of my setup.  Make sure the oil is no longer at 375 degrees, probably aim for around 100.  It can’t be stone cold either.  This fryer’s cool feature is that there is a drain hose so you’re not sitting there pouring it out the side. I layer the filtering setup so its all done in one step.  On the bottom I have a large, glass bowl that’s large enough to fit all the oil.  Then I have the filter holder, then the filter, then the strainer.  The strainer is to catch the large bits of food that might get in the oil.  Not so bad today but if you did something with a fried keto dough that stuff will flake out and get in the oil.  The filter is a pretty fine mesh so it would get clogged.  In case you were wondering, coffee filters don’t work, don’t bother.  These filters are $13 for 50 so it should last you a lifetime.  I rinse them out and use them 2-3 times until they break. 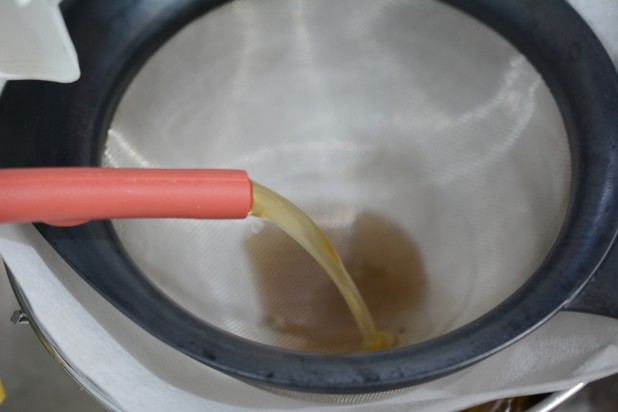 So just open the plug and let the lard flow! 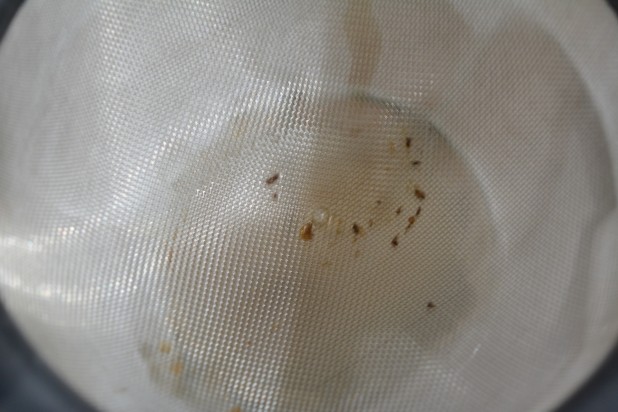 As you can see, the strainer didn’t catch much since I only used the oil once and it was for a recipe that doesn’t flake much stuff out.  But its still a good idea to catch this stuff first so it doesn’t clog the filter. 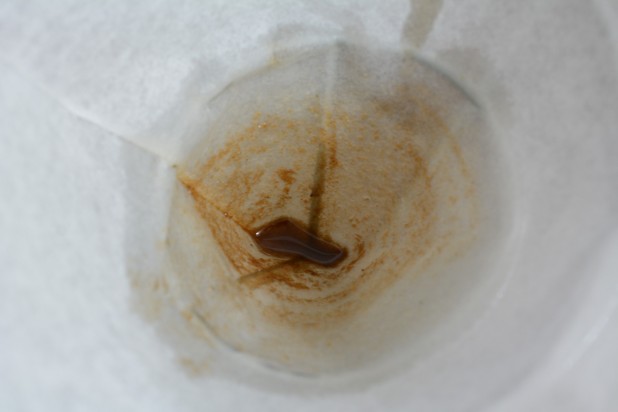 Next, here is the filter itself.  You can see its pretty fine as its getting really small particles that came off the Zucchini. 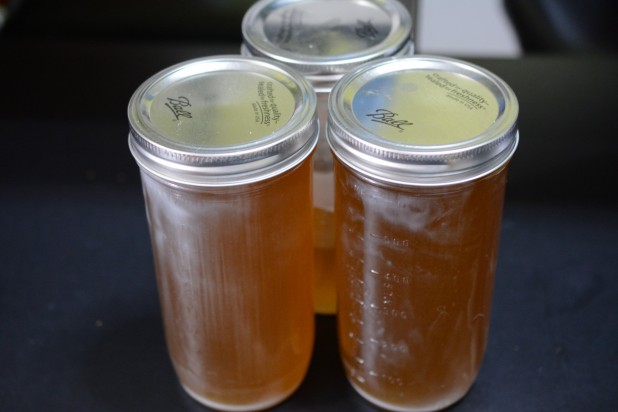