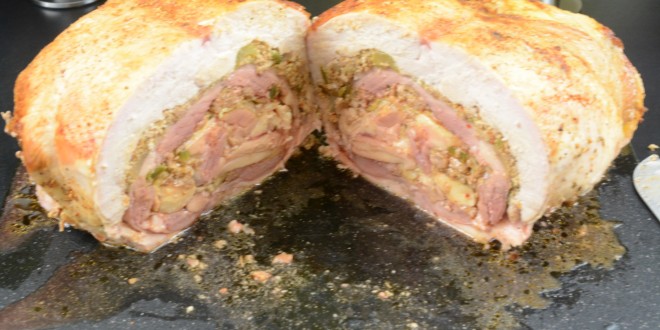 Thanksgiving is one of those American holidays that has a strong focus on food.  There’s no reason we can’t take advantage of that on the keto diet!  Last year I made a whole three part guide on how to fry a turkey (Part 1 & Part 2) and it was a huge success.  I served it once at my friendsgiving party and again for Thanksgiving and they were the most moist, amazing turkey’s ever. This year I wanted to go bigger.  Yes, I am talking about Turducken!  If you’re not familiar, a Turducken is a turkey, stuffed with a duck, stuffed with a chicken with each layer having stuffing in between. Hence Tur(key)duck(chick)en. Now, you can buy Turducken premade, however the stuffing they use between layers is not keto friendly.  So, off I went to tackle the mighty Turducken! For more holiday inspiration, check out the items tagged under Thanksgiving. 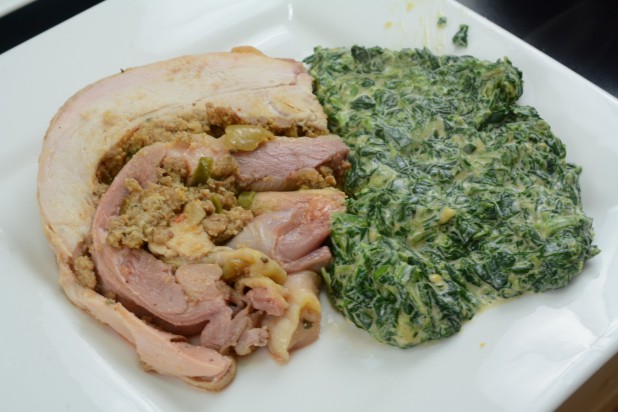 Here’s the finished product served with some Cheesy Creamy Spinach!  I must say I was surprised at how well it turned out!  The layers really came through and it was full of flavor. 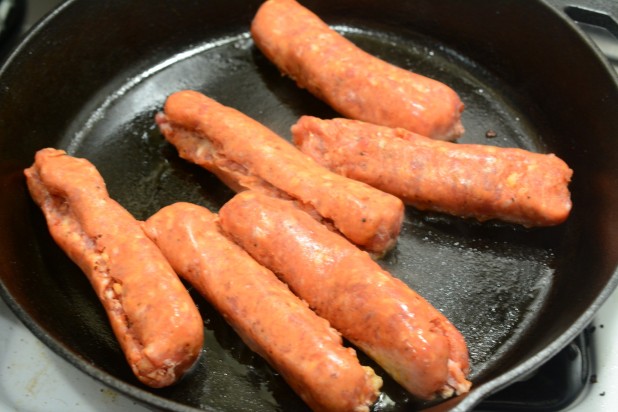 For this year’s turkey, I wanted to use a meat based stuffing.  Since it was going to be in between the layers, I wanted something hearty. In the past I’ve made Almond Bun Stuffing but it is more designed to be baked than stuffed into a turkey.  Almond flour just doesn’t absorb juices as well as bread would. So the base of this stuffing is hot italian sausages.  Remove the outer skin and cook in a hot skillet. 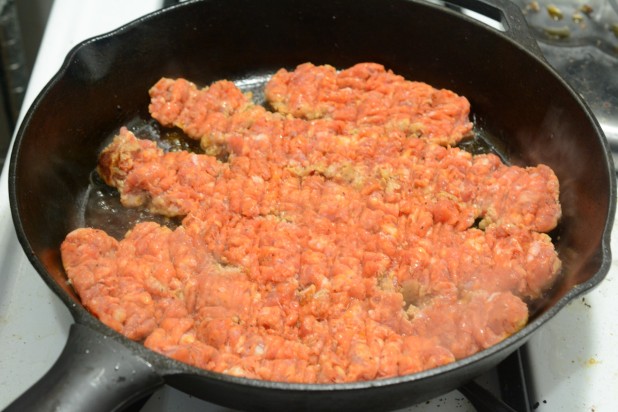 Once they start cooking, mash them up.  You want to make sure to periodically mash them so that you don’t end up with a whole, cooked sausage at the end. 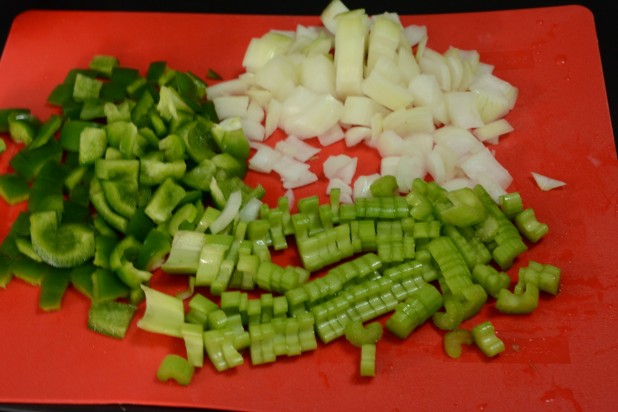 While the sausage is cooking, dice up some vegetables.  You can put in whatever you want but I went with some onion, peppers and celery. 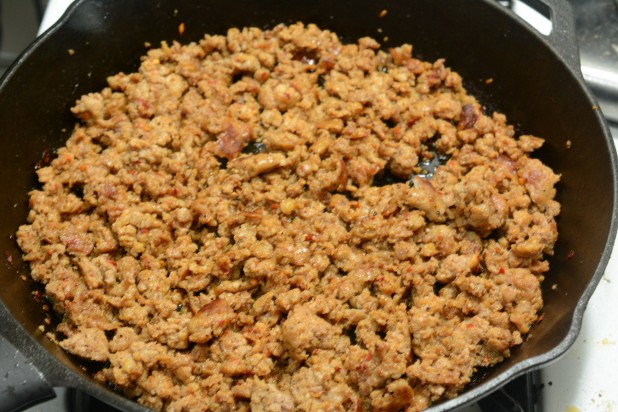 Once cooked the sausage should look like the above.  I basically flatten them and cook once side.  Then I flip them while they are more or less whole.  After that I start to break up the sausages and it ends up more like ground meat as shown above. 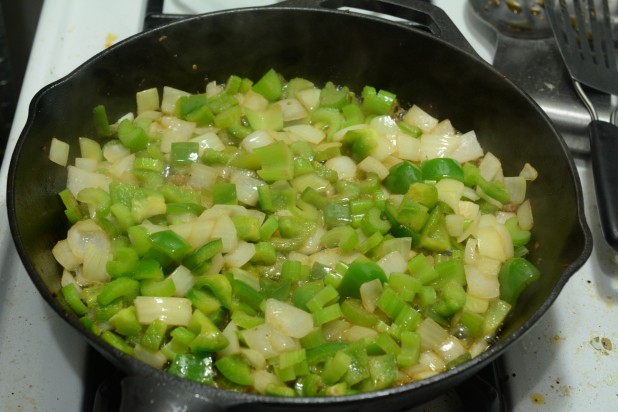 Once the meat is done, throw the veggies in the sausage grease and fry them until translucent and browning. 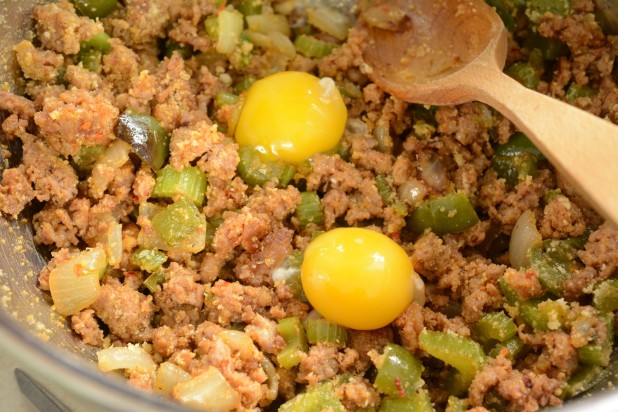 For the stuffing, I combined the sausage, the vegetables, some almond flour and two egg yolks.  I didn’t want the mixture too liquidy but I did want some binding action.   That’s why I just used the yolks. This concludes the stuffing.

Next you’re going to want to debone the poultry.  The chicken and the duck are fully deboned and the turkey is partially deboned.  You have a couple of options here. I’ve shown how to debone a chicken in the video above and you can follow the same guide for both the duck and the chicken.  Make sure to use a really sharp, flexible boning knife. The second option is to find a local butcher and ask them to debone the poultry for you.  Either way, remove the bones.  You can do this a day or so in advance if you don’t want to wake up at 6 am to start the process 🙂 For added flavor, brine the poultry after you’ve deboned it.

So the duck and the chicken are fully deboned.  For the turkey, we only partially debone it.  I’ve put together a second video to show you the partial deboning process.  The main difference is that you keep the wings and legs intact. If you have time, I’d watch both videos since the core is the same and it will help you get the deboning down pat. 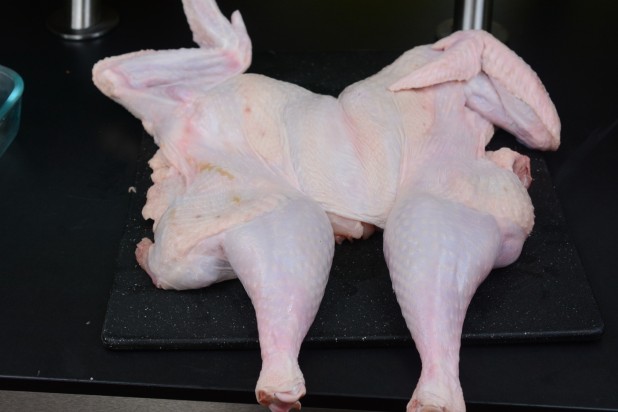 Now that you have your deboned turkey, start by laying it out on a large surface. 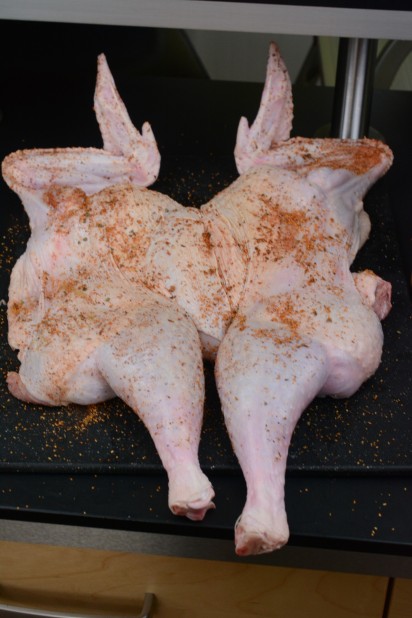 Next, liberally apply seasoning to the inside and outside of the turkey. I just used a generic poultry seasoning I had lying around.  You can get as fancy as you want here. 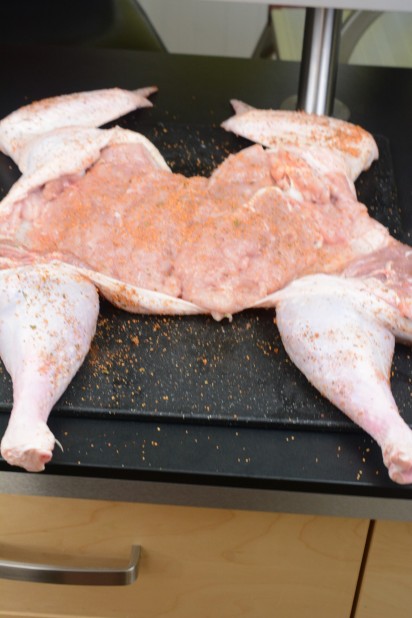 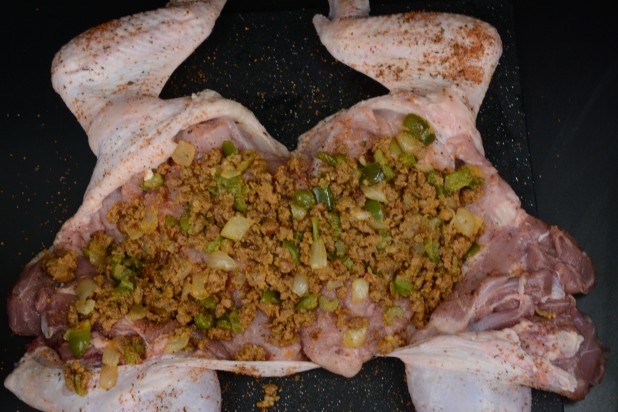 Now we start the complex part.  Put down a layer of stuffing ontop of the turkey. 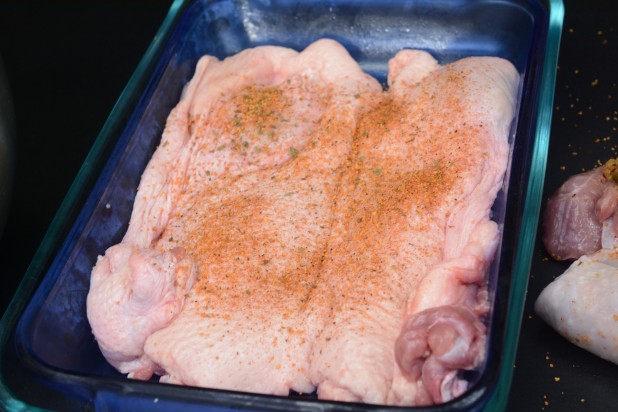 Now take the duck and season both sides of it.  I was storing them in the fridge so that’s why its in this pan. 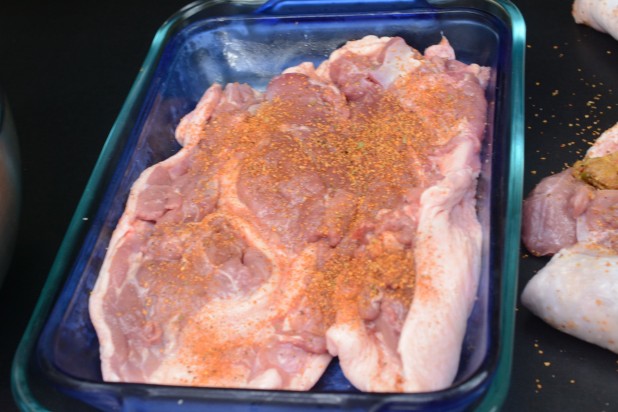 Make sure to get the inside as well. 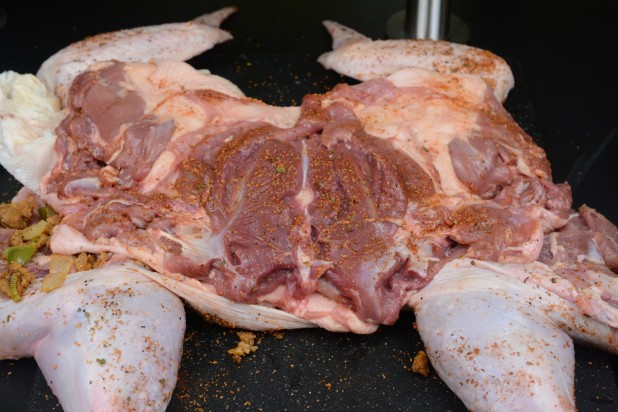 Now lay the duck on top of the stuffed turkey.  You want to alternate the orientations of the birds so place the legs on the opposite side from the turkeys. 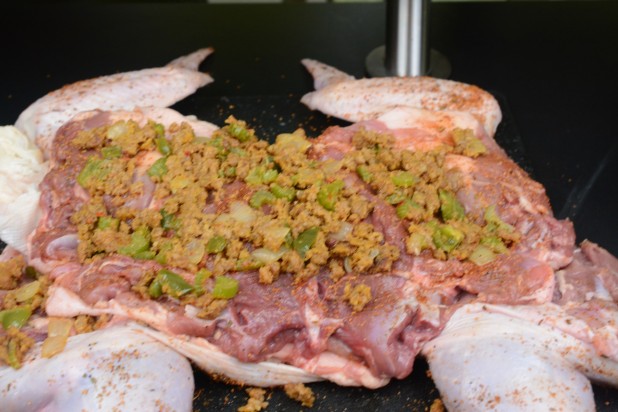 Add stuffing on top of the duck. 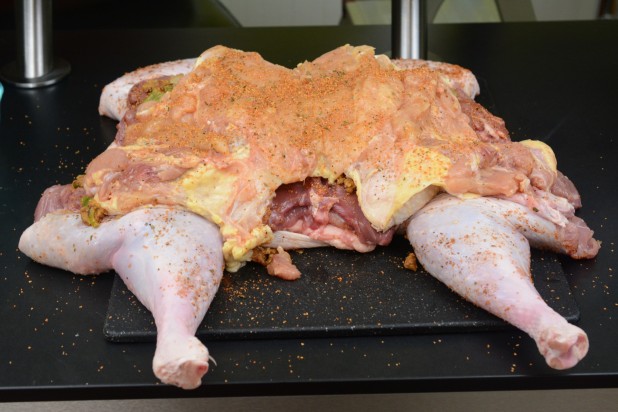 Then lay the seasoned chicken on top of the duck.  Again, make sure to alternate.  This time place the chicken so that legs are in the same orientation as the turkey. 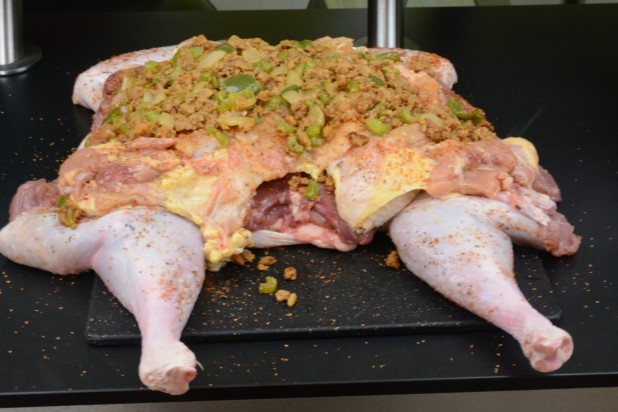 And of course add more stuffing. 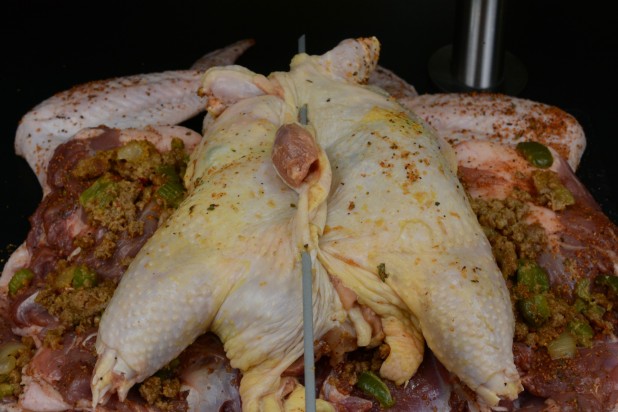 Now comes the fun part! Now there are several different ways to go about the final assembly.  Some people sew the bird up but I think that’s actually harder.  I just used some Stainless Steel Skewers and did a couple of in and outs on the chicken skin. So now you can see just the chicken sewed back up. 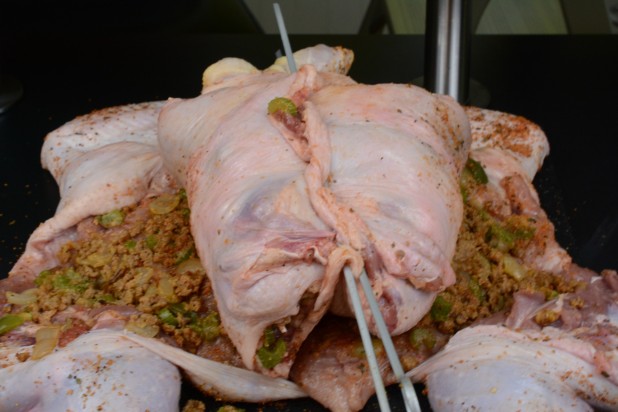 Now we do the same for the duck.  Squeeze the duck together and weave in and out of the skin. 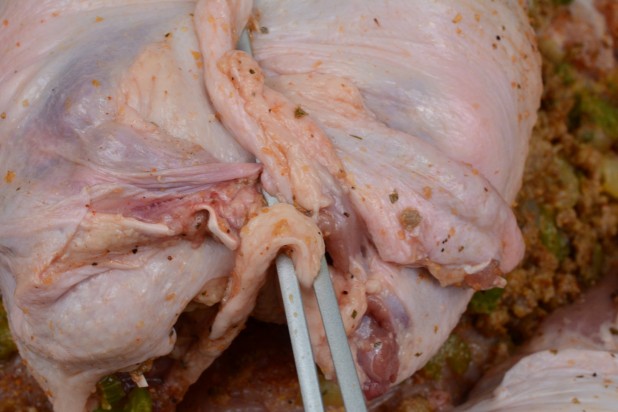 Here is a close up of the duck.  I was able to grab a piece of skin on the end as well that helped connect it all. 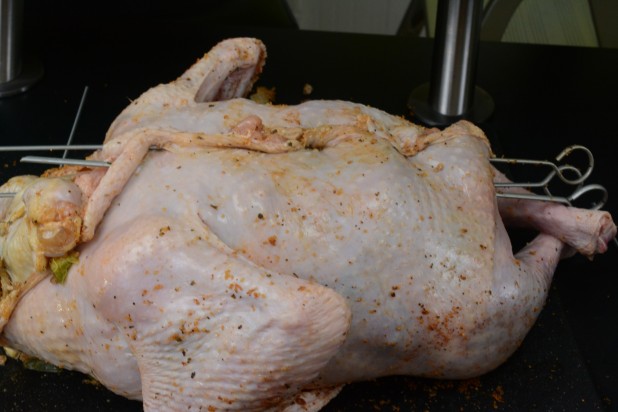 Finally, use a third skewer to sew the whole bird up.  I was pretty happy with the results! 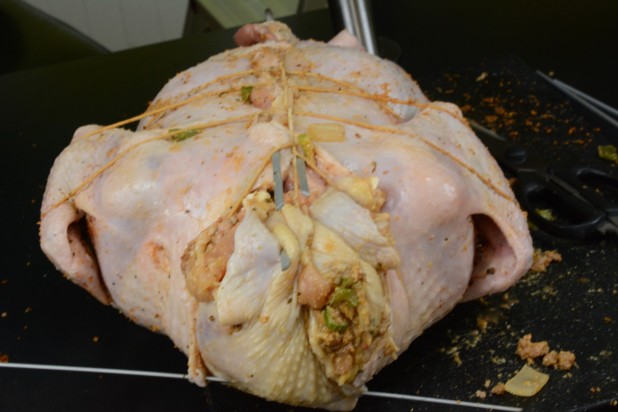 This next step is optional but I went ahead and trussed the bird to give it some additional stability. To truss the bird, start by taking some trussing twine and tying the legs together with a knot. Then make a series of half hitches along the body of the bird so that it keeps its form.  At the end, flip the bird over and run the twine through each half hitch, looping it as you go.  Then tie the string back off at the legs. 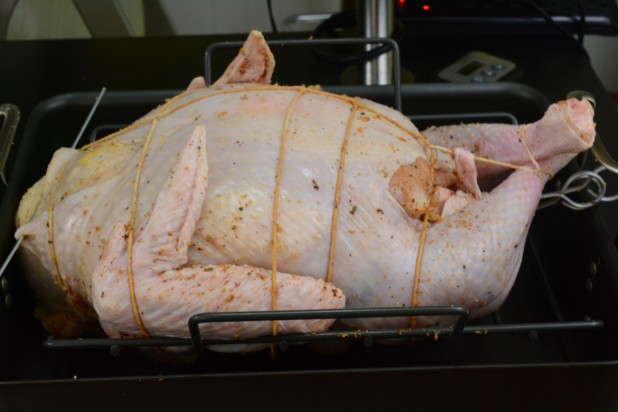 Here’s a better picture of the skewered, trussed bird. You’ll need a quite sizable Roasting Pan to hold this beast.  I was pleasantly surprised that it still looked like a turkey! 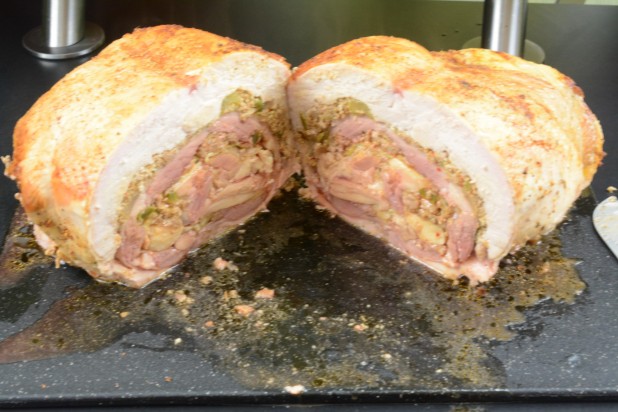 Well folks, here’s the finished product!  It turned out better than I expected!  The only downfall is that the skin on the duck is a little rubbery because it doesn’t have a chance to get hard.  The best way to serve the turducken is to slice it in half as shown, then take slices of it and cut those in half.  Then serve to your guests.  This way everyone gets a piece with all the birds and the stuffing. 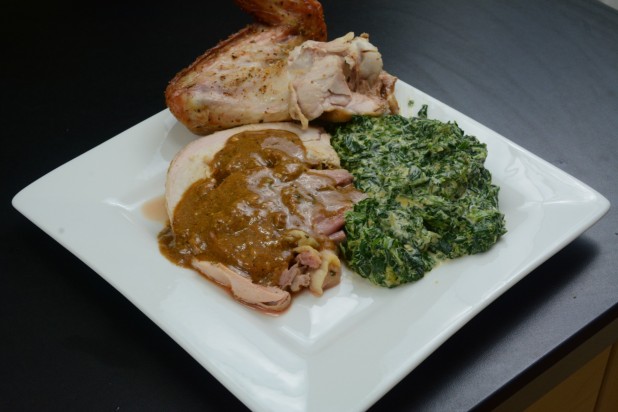 Here’s a plated picture! I made a gravy with the drippings and served it on top of the turducken.